The classical Greek philosophers used the term 'arkhé' to refer to the first and constituting element of all things. The search for this universal origin was the great obsession of these first philosophers. 'Arkhé' is therefore the foundation of everything and is the element that continues to be part of everything despite change. This term brings together all these meanings, since it is simultaneously the principle, the guiding rule and the foundation that makes all presence and existence possible. 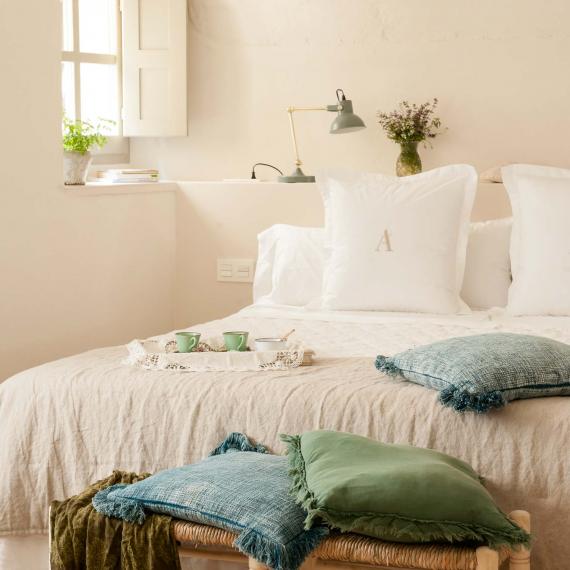 Rice paddies room is inspired by... the agriculture of Pals

Rice paddies room, the rice of Pals, is an age-old crop with its own character which, over time, has become worthy of an honour in itself and which has created a surprising and unique landscape in the region. Over many years, these rooms housed seasonal workers who came to plant and harvest the rice. In addition, this house was the first, and only, inn with a license in the municipality for many years. 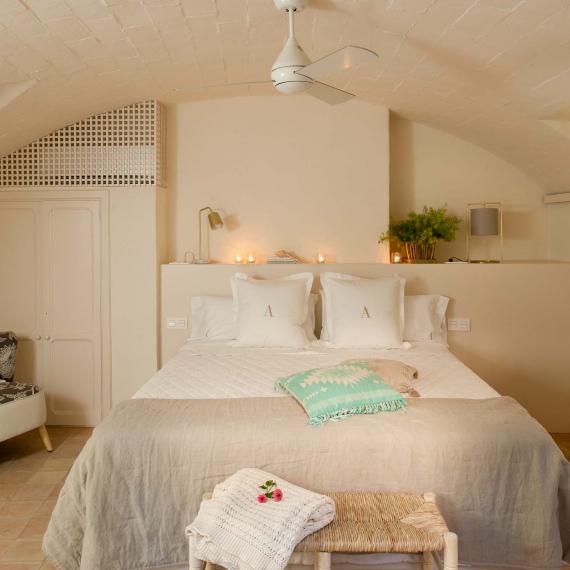 The Silence room is inspired by... the fifth essence

Peace and calm that one can drink in between the beautiful narrow cobbled streets of the centre of the town. With views of the sea, it is located within the Natural Park of Montgrí, with the Medes Islands close by. Baix Ter is a region that offers a unique geography and landscape, largely unknown, that has a great historical and cultural wealth. In this privileged environment, tranquillity, quietness and silence, become valuable and essential allies.

Aristotle (384 BC - 322 BC) developed a physical system in which there was a central hypothetical idea: the 'fifth essence', which is the ether formed by the heavens and the stars and which is superior to the four main elements: earth, water, air and fire. The 'fifth essence' is a concept from classical antiquity that was born out of the need to find the essential core of any substance. 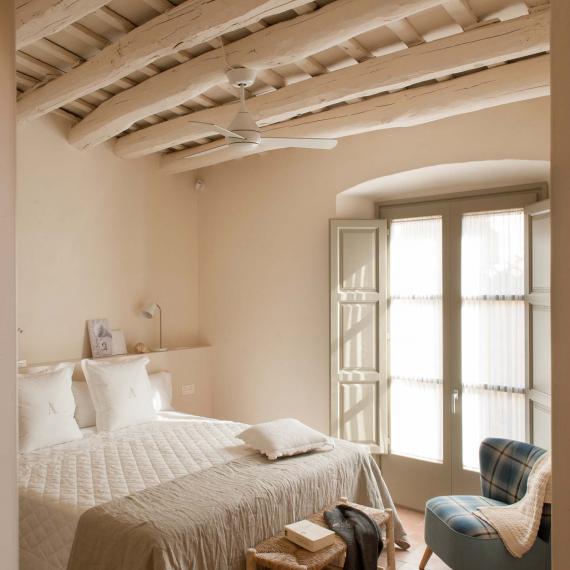 The Water room is inspired by... the wetlands

Pals is located at the top of small hill - known as Mont Aspre - above the plain that was formerly covered by lakes and flooded areas. This is the feature that gave the name to the town, since it comes from the Latin Palus, which means 'wetland' and 'marshy terrain', referring to the nearby wetlands, the ‘Aiguamolls’ in Catalan.

Thales of Miletus (635 - c. 545 BC) was the first to develop the idea of the Arkhé and proposed water as the universal principle and the origin of all things. In addition, water is synonymous with the creation of life and this is an element that plays a crucial and essential role for civilization. He based and founded this theory with the proven observation that moisture was ubiquitous in nature and the belief that the Earth floated on water. 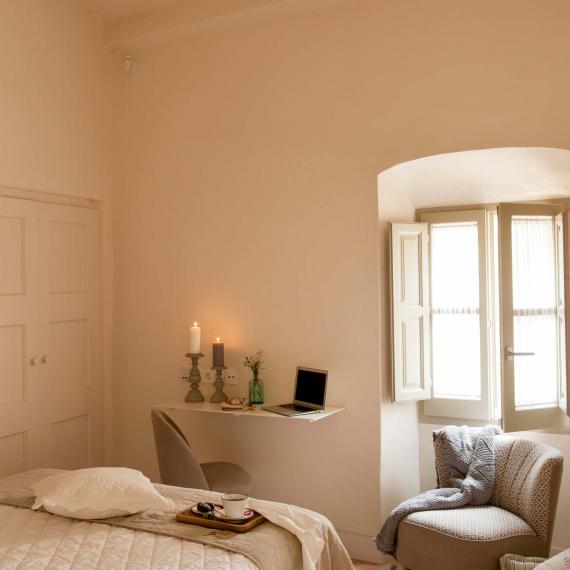 The Earth room is inspired by... the Empordà

Mont Aspre, located in the heart of the Empordà, offers views across a unique landscape. The extensive agricultural scenery, made up of rice paddies and wetlands, forms an exceptional and incomparable landscape. This landscape is also formed by the beach of Pals, a wide, sandy beach with its own very special panoramic view. The whole of this geography shares a common and essential element: the earth.

Xenophanes (c. 570 - 475 BC) proposed the earth - and the mud - as the beginning of all things: the arkhé. Xenophanes argued that the earth was infinite and always remained under our feet as an unchanging whole and that everything was destroyed periodically, returning to the primitive mud from which new forms emerged indefinitely. It is no accident, then, that Xenophanes chose the earth as the sole representative of this elemental origin. 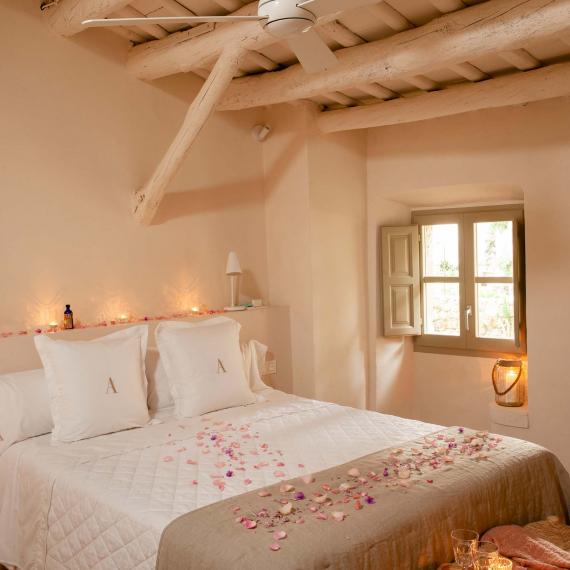 The Fire room is inspired by... the charcoal store

In the past, the ground floor was a small grocery store. If the walls of this house could talk, they would tell of how they received tons and tons of charcoal in their most dusty times. Stored on the first floor, the charcoal was piled up with the supplies and was sold throughout the year.

Heraclitus (544-484 BC) also looked to natural elements in order to propose fire as an arkhé, as its dynamic nature made it the element with the qualities closest to those of nature: it was always in constant change and movement. Fire is infinitely fluent, impossible to stop, and it is also a symbol of resurgence and purity. Although the flames are changing, the fire always lasts. 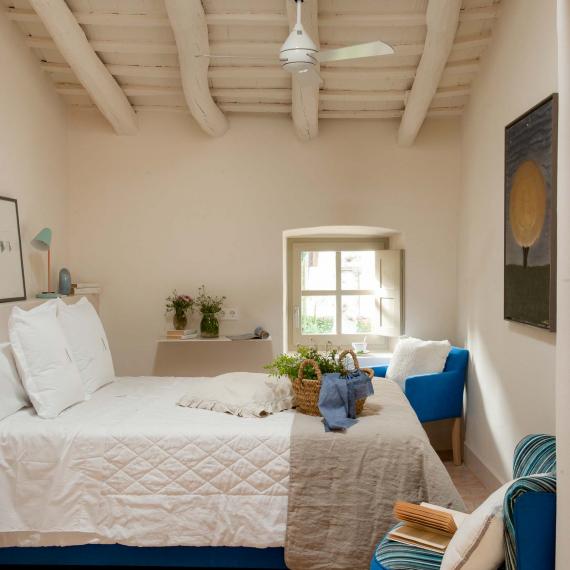 The Air room is inspired by... the Tramuntana

At the top of a hill and open to the four winds, Pals benefits from the Tramuntana, a strong and cold wind that smooths and turns the sky a clear, pure blue. Its intensity and strength make it a wind with character, one that is unique and recognised throughout the territory.

"It seems I have understood the reason for the obscure, atavistic, admiration that the people of my country feel for this wind. This admiration persists (...) because the temperature of the air the Tramuntana brings is literally an ideal climate: a tonic, vital, kind, prodigiously hygienic and purified climate."

Anaxímenes (c. 585 - c. 524 BC), a disciple of Anaximander, designated the air as an arkhé. All matter would come from the air through the processes of rarifaction or condensation. Thus, the rarefied air would become fire, whereas, when it condensed, it would become water and subsequently earth. The choice of air as arkhé is no coincidence: air dominates and maintains the unity of the cosmos, just as the soul maintains the unity of the body. 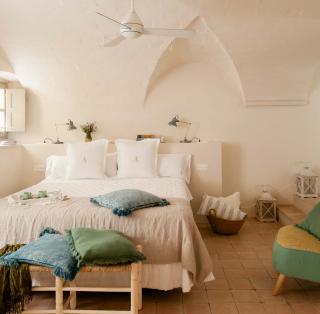 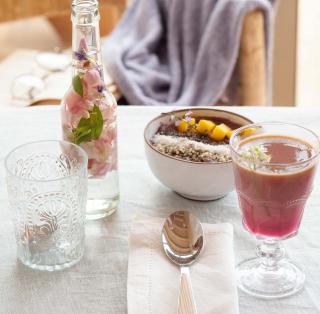 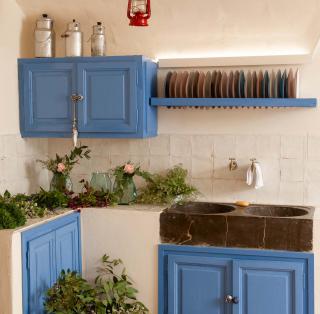 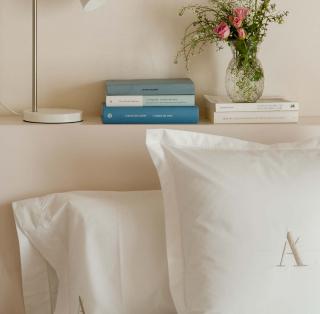 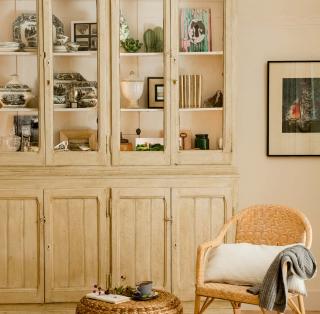 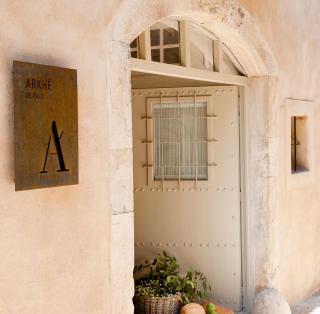